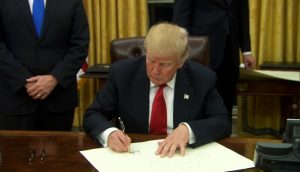 On Wednesday, a federal appeals court ruled that President Donald Trump had exceeded his authority with his threats of withholding funds from the country’s sanctuary cities that do not cooperate with federal immigration authorities.

In a decision of 2-1, the appeals court said the executive order by Trump in January of 2017 that cut off sanctuary cities from federal funds was unconstitutional. However, the court ruled as well that a lower court had gone too far when it blocked the order across the U.S.

A spokesperson for the Justice Department said that Trump’s executive order had been a legal use of the power the president holds. He called the decision by the 9th Circuit Court a win for criminal aliens of California, that are now able to continue committing crimes knowing the leadership of the state will protect them from immigration officers whom have the responsibility to remove them from the U.S.

Trump signed his executive order in late January of 2017 after being in office just five days, calling undocumented immigration a danger to the U.S. national security. However, a U.S. District Judge called Trump’s threat coercive and added that spending powers were the responsibility of the legislative branch and not the executive.

The ruling by the judge came due to a pair of lawsuits that two counties in California filed. His decision used statements from both Trump and Jeff Sessions the U.S. Attorney General that indicated the order could put federal funds in the hundreds of millions of dollars in jeopardy.

The federal government argued the order applied only to three grants from Homeland Security and the Justice Department that would affect fewer than $1 million to Santa Clara County and possibly nothing to San Francisco County.

The fight by the White House against sanctuary cities suffered another setback a week ago, when a judge denied a dismiss motion of a lawsuit filed by Chicago over the efforts by Sessions to force cooperation with immigration officers.

In September, an injunction was issued by a district court judge against an order by Sessions that required police to be cooperative with federal agents or be in risk of losing federal grants for law enforcement.

The AG wanted local police to be required to tell the U.S. government prior to releasing any undocumented immigrants it had in custody, allow immigration agents into local jails, and share the immigration status of people with federal agents.