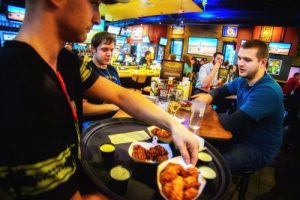 Buffalo Wild Wings has wings, beer and sports in its restaurants, and might be getting into the sports bookmaking market.

The popular chain of sports bars that has locations in all 50 U.S. states as well as internationally, said it was exploring the recently expanded sports betting industry in the United States.

A spokesperson for Buffalo Wild Wings said that as the country’s largest sports bar, we believe we are in a great position to use sports betting as a way to enhance the restaurant experience of our guests. The spokesperson added that the company was actively exploring its opportunities including working with potential partners.

In May, the federal law restricting legal sports betting to three U.S. states over the last 26 years was overturned by the U.S. Supreme Court.

Since that ruling by the country’s high court that struck down the law New Jersey, Mississippi and Delaware all started offering sports betting. West Virginia is expected to be operating prior to the start of the 2018 NFL regular season. Analysts have predicted that over half of the U.S. states will have sports betting by 2023.

Buffalo Wild Wings, which was founded in 1982, transformed the sports bar into a nationwide chain, with certain locations that feature a Las Vegas sportsbooks feel as the walls are covered with giant television screens that are tuned to several different sporting events and games.

Each state varies as to what it requires for sports betting, but Buffalo Wild Wings would likely be required to partner in each state with a local gaming operator.

In June of 2017, the CEO of Buffalo Wild Wings Sally Smith blamed the company’s declining sales on the millennial consumers, saying to shareholders through a letter that millennial consumers have become more attracted to amongst other things, ordering their food for delivery from restaurants, as well as eating quickly. With fewer customers coming into restaurants sales of alcohol suffer, and that is where the highest margins are for Wild Wings.

The brand in response to that began building locations that were smaller known as B-Dubs Express but is hoping to increase sales again of alcohol through testing beer walls that are self-serve, and the possibility of adding sports betting.