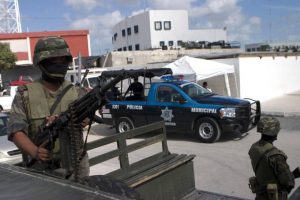 A level two travel advisory was issued by the State Department for Mexico on Wednesday after Mexican authorities found eight bodies in Cancun, the popular beach resort that attracts millions of tourists annually.

The trunk of a taxi found abandoned at an area shopping mall contained the bodies of a male and female, reported a local new agency. The police reported that the two bodies were not identified.

Two men were discovered dismembered and put into plastic bags at a separate location, said law enforcement officials. The bodies, whose identities are not known were found left on Rancho Viejo Avenue, reported a local Cancun news agency.

Authorities found another body of man who had been tied up and shot. A sixth male was murdered while in a hammock and a seventh victim had been fatally shot then covered with a plastic bag, said authorities from the Quintana Roo prosecutors office.

The final victim was discovered dismembered in the Tres Reyes (Three Kings) neighborhood of Cancun, local reports said. All of the killings took place outside the Cancun hotel zone that runs along the beach.

The advisory by the State Department issued a warning to travelers saying they should exercise increased caution while in Mexico because of crime. The advisory added that violent crimes had become widespread in Mexico.

Travelers in Mexico were advised to stay away from Guerrero, Michoacan, Colima, Tamaulipas and Sinaloa state because of crime. A suggestion was made by the advisory to use toll roads when possible, avoid driving after dark and be vigilant if visiting an ATM or bank.

In addition, the State Department’s advisory noted that while a large number of the homicides in the state of Quintana Roo appeared to be targeted, there has been an occurrence of violent crimes in areas that are frequented by visitors from the U.S.

Incidents of shootings that injured or killed bystanders have taken place, said the State Department.

It seems that violence in Cancun, a very popular beach destination for travelers from around the world, has been on the rise. Fifty-seven murders were reported in April, including 14 that took place over a period of 36 hours near major tourist attractions. The 14 murders authorities believe were all drug-related.

Spectrecoin Price Up 5.7% Over Last Week

RATIONAL Aktiengesellschaft Given Consensus Recommendation of “Sell” by Brokerages