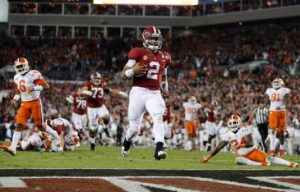 College football kicks off a full slate of games beginning Thursday August 30 through the weekend, as the 2018 college football regular season has arrived.

Odds makers have released an updated futures listing for the winner of the 2019 College Football Playoff National Championship. The Alabama Crimson Tide, to no one’s surprise remains atop the list as the favorite, but the gap has been closed by the Clemson Tigers in the odds released early this week.

Alabama on several sportsbooks is now the +220 favorite to win the national title game as of August 28. Clemson inched closer to the Tide and is now +400, while Ohio State has the third best odds at +750 followed by Georgia at +800 and Washington at +1500 to round out the top five.

Since the futures were first updated in late June to the latest update this week, Alabama has pulled back to +220 from its original +175. Clemson was at +600 in June and is now at +400, while Washington has impressed odds makers moving to its current +1500 from +2200.

Public bettors love their favorite teams and although Alabama is one of the most popular, other teams that will see plenty of action, although as long shots, include the Miami Hurricanes at +4000, and the Texas Longhorns at +5000.

However, Alabama will have to either play poorly and win or lose outright before odds makers are likely to knock it off its perch at No. 1. The Tide has had a bit of controversy this preseason with the quarterback battle between two-year starter Jalen Hurts and 2018 CFP national title game hero Tua Tagovailoa.