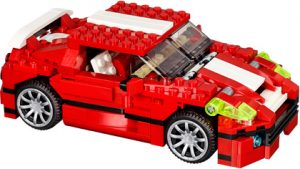 Sales of Lego Bugatti sports cars and dinosaurs have helped stabilized revenue at the Danish toymaker during the first six months of 2018 following a drop in revenue for the first time in over 10 years during 2017.

The company, which is privately owned, famous for the colorful plastic building bricks it makes, last year reorganized, acknowledging its business was too complicated.

Attempts the company has made to recover were hampered by the largest toy store chain in the U.S. Toys R Us filing bankruptcy, but the demand for its new products like the Jurassic World lineup has helped steady revenue during the first half of 2018.

CEO Niels Christiansen said he was satisfied because the company’s goal this year was to stabilize growth and it has already been accomplish in just the first six months.

Consumer sales in all grew 1% during the first six months, while revenue remained flat related to constant currencies while falling 5% in Danish crowns totaling 14.3 billion crowns or $2.23 billion, which is almost nothing compared to growth of 25% the company experienced in 2015.

The lineups of toys that grew the fastest were Lego’s Technic series, the Creator lineup that is able to be built into many designs, Ninjago the warrior-themed lineup, and its Classic series.

Success in innovation is crucial for Lego, as over 60% of its entire portfolio is made up of new products every year.

Sales for Western Europe increased by the low-single digits, while sales declined slightly across North America. China continued to shine bright for Lego with growth in the double digits, although it represents less than 10% of overall group sales.

Lego, which is an abbreviation for “leg godt,” that is Danish for “play well,” is planning to open two of its flagship locations in Beijing and Shanghai and continues to partner with Tencent, the Chinese internet giant.

Lego is working as well with local educators, state schools and private providers of education in China to get Chinese kids to play with Lego as a form of boosting creativity, attention spans and motor skills.

Lego, whose competitors include Mattel and Hasbro, is also betting big on toys that combine its physical brick with online.

One example that has been successful, according to CEO Christiansen, is one of its apps that allows kids to write a simple form of code to control a Batmobile or DUPLO train that was self-built.