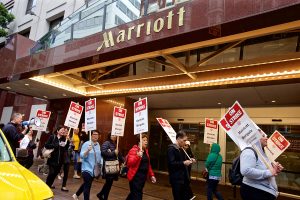 Thousands of workers at Marriott Hotel in eight cities in the U.S. have gone on strike demanding higher wages following months of negotiations that have failed.

In all, close to 7,700 workers at Marriott including front desk attendants, housekeepers and the majority of non-management positions have gone on strike. Unite Here the hospitality workers’ union organized the strike after contracts for the workers with Marriott International, the largest chain of hotels in the world, expired during July and August.

The Unite Here president D. Taylor said that Marriott is the most profitable and richest hotel company anywhere in the world and by going on strike, Unite Here members will change the lives of all hotel workers across the industry.

Negotiations between labor unions and Marriott failed to reach the demands made by both sides. Hotel workers say higher wages are needed as is better healthcare insurance plans, and the offer currently on the table is not enough.

On local president of Unite Here said the strike was forced by Marriott. He added that after five years of record high profits and over six months of contract negotiations Marriott still does not understand – it is the work of the employees that creates the hotel guests’  great experience and we are why the guests keep returning. He added that the demand that has been made is both fair and modest.

One employee, who has worked for 22 years at Marriott, said she  and the others would not return to work until contracts are resolved at all of the hotels.

The employee added that often times it is living paycheck to paycheck and if the hotel does not have business such as a meeting or banquet then we do not work.

Marriott hotels said they would remain open during the ongoing strike by workers.