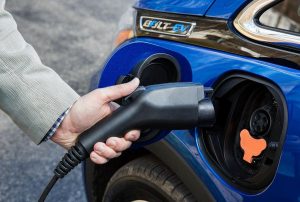 Two of the largest automakers have pushed back on the White House administration’s proposed pullback of fuel-economy standards in the United States.

In filings that were due Friday, General Motors Co. was preparing to propose that instead of opposing the zero-emissions vehicle mandate in California, federal regulators should embrace an electric-vehicles nationwide sales program beginning in 2021.

At the same time, Honda Motor took exception to U.S. President Donald Trump’s proposed freeze on the mileage standards for vehicles and called for continuing the steady increase to requirements.

The responses, which will be proposed formally in comments to federal regulators, mark the clearest signs to date of the misgiving in the auto industry about the proposed cap on fuel-economy requirements for 2020 and unwind the power California has to set its own standards for fuel-efficiency for autos and its mandate for zero-emission vehicles.

Mark Reuss the executive vice president of global development at GM said everyone knows we can do better than the proposal of Trump and we know the industry is capable of doing better than that.

The U.S. based automaker said that a nationwide program would put 7 million electric cars, with long-range capabilities, on the road while slashing carbon dioxide emission by 375 million tons by 2030, compared with current zero-emission mandates.

The National Highway Traffic Safety Administration and the Environmental Protection Agency recommended maintaining the federal requirement for fuel-economy at 37 miles per gallon between 2020 and 2026 rather than increasing them to 47 mpg before 2025 under Obama administration rules.

The two agencies want to also revoke the authority of the most populous state in the nation to adopt rules for fuel efficiency of its own, including its mandate for electric cars.

In Friday comments, the Air Resources Boards of California called on the White House to withdraw its plan, saying that the only winners from the proposal to killing fuel efficiency standards are oil companies, in a letter sent to regulators.

While relief was sought by the auto industry from the rules set by the Obama administration, carmakers consider the response by the Trump administration to be too aggressive. They worry it would force them to make vehicles for California along with 12 more states that are following similar standards and another entirely different fleet for the other 37 states.