Complete the form below to receive the latest headlines and analysts' recommendations for FormFactor with our free daily email newsletter:

FormFactor, Inc. (NASDAQ:FORM) CEO Mike Slessor sold 50,000 shares of the company’s stock in a transaction dated Monday, February 10th. The stock was sold at an average price of $25.91, for a total transaction of $1,295,500.00. Following the transaction, the chief executive officer now owns 361,623 shares in the company, valued at approximately $9,369,651.93. The sale was disclosed in a filing with the SEC, which can be accessed through this link.

FormFactor (NASDAQ:FORM) last announced its quarterly earnings data on Wednesday, February 5th. The semiconductor company reported $0.41 earnings per share for the quarter, topping the Thomson Reuters’ consensus estimate of $0.31 by $0.10. The firm had revenue of $178.63 million during the quarter, compared to analysts’ expectations of $173.99 million. FormFactor had a return on equity of 10.09% and a net margin of 6.67%. The company’s quarterly revenue was up 26.8% compared to the same quarter last year. During the same period in the previous year, the business posted $0.31 EPS. As a group, equities analysts predict that FormFactor, Inc. will post 0.92 EPS for the current year.

Featured Article: What is quantitative easing? 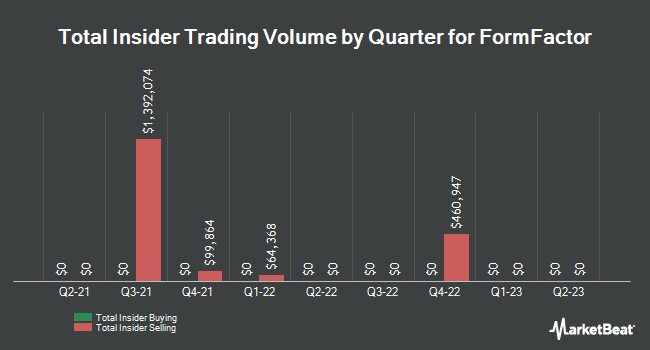