Complete the form below to receive the latest headlines and analysts' recommendations for CNO Financial Group with our free daily email newsletter:

CNO Financial Group Inc (NYSE:CNO) Director Dan Maurer bought 10,000 shares of the company’s stock in a transaction that occurred on Monday, March 23rd. The stock was purchased at an average price of $11.29 per share, for a total transaction of $112,900.00. Following the transaction, the director now owns 33,079 shares of the company’s stock, valued at $373,461.91. The purchase was disclosed in a filing with the Securities & Exchange Commission, which is available at this hyperlink.

The business also recently declared a quarterly dividend, which was paid on Tuesday, March 24th. Shareholders of record on Tuesday, March 10th were issued a $0.11 dividend. This represents a $0.44 dividend on an annualized basis and a yield of 3.13%. The ex-dividend date was Monday, March 9th. CNO Financial Group’s payout ratio is presently 24.44%.

CNO Financial Group, Inc, through its subsidiaries, develops, markets, and administers health insurance, annuity, individual life insurance, and other insurance products for senior and middle-income markets in the United States. It operates through Bankers Life, Washington National, Colonial Penn, and Long-Term Care in Run Off segments.

Featured Story: What is diluted earnings per share (Diluted EPS)? 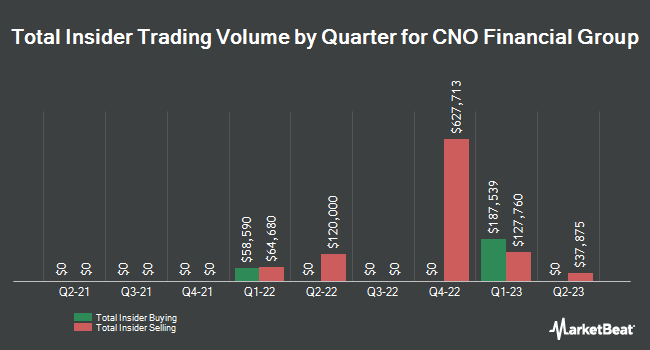 Head to Head Review: Sonim Technologies versus Its Rivals

Reviewing IAA and Its Peers