Complete the form below to receive the latest headlines and analysts' recommendations for New York Times with our free daily email newsletter:

New York Times Co (NYSE:NYT) announced a quarterly dividend on Tuesday, June 30th, RTT News reports. Shareholders of record on Friday, July 10th will be given a dividend of 0.06 per share on Thursday, July 23rd. This represents a $0.24 annualized dividend and a yield of 0.57%.

New York Times (NYSE:NYT) last issued its earnings results on Wednesday, May 6th. The company reported $0.17 earnings per share for the quarter, beating the consensus estimate of $0.13 by $0.04. New York Times had a net margin of 7.85% and a return on equity of 12.98%. The business had revenue of $443.60 million for the quarter, compared to analyst estimates of $438.88 million. During the same period in the previous year, the business earned $0.20 EPS. The firm’s revenue was up 1.0% on a year-over-year basis. As a group, research analysts anticipate that New York Times will post 0.75 EPS for the current year.

The New York Times Company, together with its subsidiaries, provides news and information for readers and viewers across various platforms worldwide. The company offers The New York Times (The Times), a daily and Sunday newspaper in the United States, as well as international edition of The Times; and operates the NYTimes.com Website.

Read More: Trading based on a resistance level 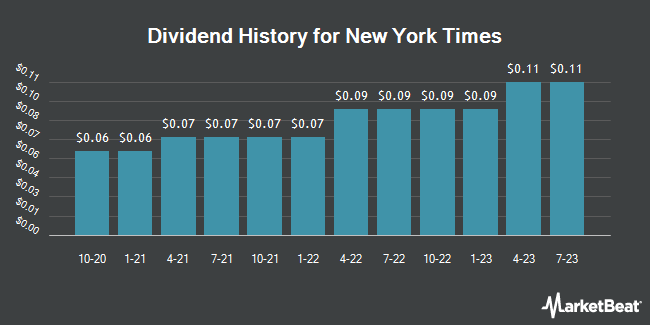