Complete the form below to receive the latest headlines and analysts' recommendations for First Commonwealth Financial with our free daily email newsletter:

First Commonwealth Financial (NYSE:FCF) announced a quarterly dividend on Tuesday, July 28th, Zacks reports. Shareholders of record on Friday, August 7th will be paid a dividend of 0.11 per share by the bank on Friday, August 21st. This represents a $0.44 annualized dividend and a yield of 5.56%. The ex-dividend date of this dividend is Thursday, August 6th.

In related news, EVP Matthew C. Tomb acquired 4,000 shares of the business’s stock in a transaction dated Wednesday, May 13th. The stock was bought at an average price of $6.93 per share, for a total transaction of $27,720.00. Following the transaction, the executive vice president now owns 63,647 shares of the company’s stock, valued at $441,073.71. The purchase was disclosed in a filing with the SEC, which is available through this hyperlink. 1.53% of the stock is currently owned by corporate insiders.

Featured Article: Capital gains and your 401(k) or IRA 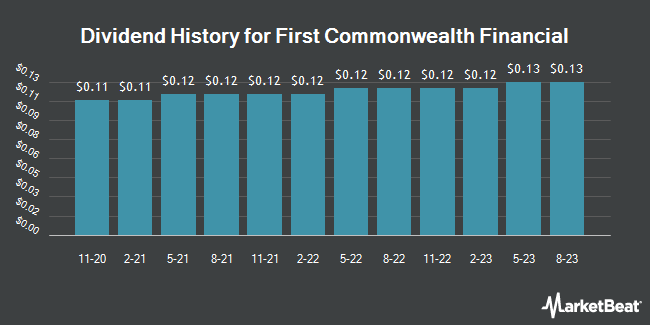