Complete the form below to receive the latest headlines and analysts' recommendations for American Water Works with our free daily email newsletter:

American Water Works Company Inc (NYSE:AWK) announced a quarterly dividend on Thursday, July 30th, Wall Street Journal reports. Stockholders of record on Wednesday, August 12th will be given a dividend of 0.55 per share by the utilities provider on Tuesday, September 1st. This represents a $2.20 annualized dividend and a dividend yield of 1.49%. The ex-dividend date is Tuesday, August 11th.

In other American Water Works news, Director Lloyd M. Yates bought 2,000 shares of the business’s stock in a transaction dated Wednesday, May 13th. The shares were acquired at an average price of $115.95 per share, with a total value of $231,900.00. Following the purchase, the director now owns 4,100 shares in the company, valued at approximately $475,395. The purchase was disclosed in a document filed with the SEC, which is available through this link. Company insiders own 0.30% of the company’s stock.

Featured Article: The mechanics of the bid-ask spread in trading 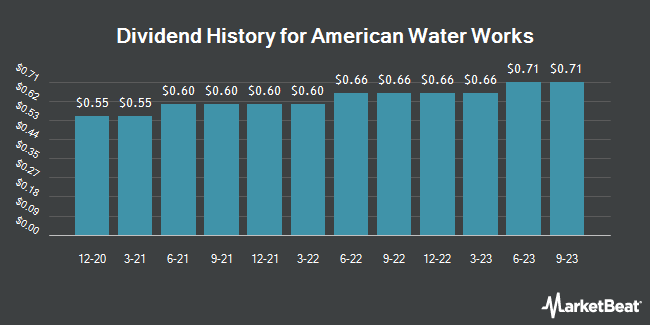