Complete the form below to receive the latest headlines and analysts' recommendations for Cullen/Frost Bankers with our free daily email newsletter:

Cullen/Frost Bankers, Inc. (NYSE:CFR) announced a quarterly dividend on Friday, July 31st, Wall Street Journal reports. Shareholders of record on Monday, August 31st will be paid a dividend of 0.71 per share by the bank on Tuesday, September 15th. This represents a $2.84 annualized dividend and a yield of 3.94%. The ex-dividend date is Friday, August 28th.

Cullen/Frost Bankers (NYSE:CFR) last posted its earnings results on Thursday, July 30th. The bank reported $1.47 EPS for the quarter, beating the Zacks’ consensus estimate of $0.77 by $0.70. Cullen/Frost Bankers had a net margin of 27.84% and a return on equity of 7.38%. The company had revenue of $347.32 million during the quarter, compared to analysts’ expectations of $357.31 million. During the same quarter in the prior year, the company posted $1.72 earnings per share. As a group, equities research analysts anticipate that Cullen/Frost Bankers will post 2.41 earnings per share for the current fiscal year.

Cullen/Frost Bankers, Inc operates as the holding company for Frost Bank that offers commercial and consumer banking services in Texas. It operates in two segments, Banking and Frost Wealth Advisors. The company offers commercial banking services to corporations and other business clients, including financing for industrial and commercial properties, interim construction related to industrial and commercial properties, equipment, inventories and accounts receivables, and acquisitions; commercial leasing; and treasury management services.

Read More: What is range trading? 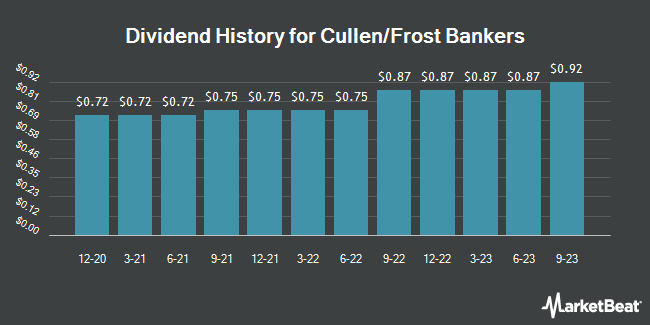