Coca-Cola (NYSE:KO) last issued its quarterly earnings data on Tuesday, July 21st. The company reported $0.42 earnings per share for the quarter, beating the Thomson Reuters’ consensus estimate of $0.40 by $0.02. The firm had revenue of $7.20 billion for the quarter, compared to the consensus estimate of $7.26 billion. Coca-Cola had a net margin of 26.77% and a return on equity of 41.44%. Coca-Cola’s quarterly revenue was down 28.0% compared to the same quarter last year. During the same period last year, the firm posted $0.63 EPS. Equities analysts forecast that Coca-Cola will post 1.79 earnings per share for the current year.

Several analysts recently weighed in on the stock. Zacks Investment Research downgraded shares of Coca-Cola from a “hold” rating to a “sell” rating and set a $52.00 price objective on the stock. in a research report on Tuesday, September 22nd. Morgan Stanley upgraded shares of Coca-Cola from an “equal weight” rating to an “overweight” rating and lifted their price objective for the company from $52.00 to $54.00 in a research report on Wednesday, July 22nd. They noted that the move was a valuation call. Finally, Bank of America reiterated a “buy” rating and issued a $53.00 price objective on shares of Coca-Cola in a research report on Friday, July 17th. One analyst has rated the stock with a sell rating, four have issued a hold rating, fifteen have assigned a buy rating and one has issued a strong buy rating to the company’s stock. The company has a consensus rating of “Buy” and an average target price of $54.19. 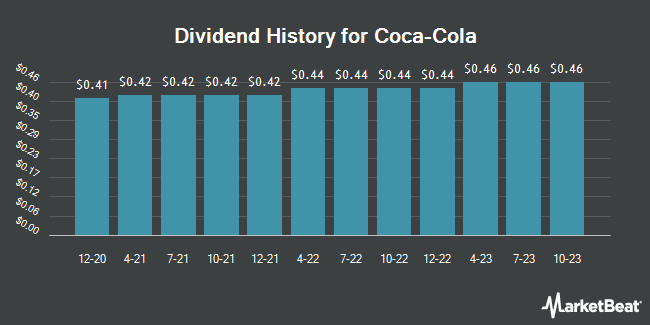 The Goodyear Tire & Rubber Lifted to Buy at BidaskClub