Fortinet (NASDAQ:FTNT) was upgraded by DA Davidson from a “neutral” rating to a “buy” rating in a research note issued to investors on Tuesday, Anlyst Ratings reports. The brokerage presently has a $170.00 price target on the software maker’s stock, up from their prior price target of $130.00. DA Davidson’s price objective would suggest a potential upside of 14.94% from the company’s previous close.

A number of other analysts have also recently weighed in on FTNT. Mizuho increased their target price on shares of Fortinet from $130.00 to $140.00 and gave the stock a “neutral” rating in a report on Wednesday, December 16th. Edward Jones began coverage on shares of Fortinet in a research note on Wednesday, December 9th. They set a “buy” rating on the stock. JPMorgan Chase & Co. downgraded Fortinet from a “neutral” rating to an “underweight” rating and set a $140.00 target price for the company. in a research note on Wednesday, December 9th. BidaskClub cut Fortinet from a “buy” rating to a “hold” rating in a research report on Thursday, January 7th. Finally, KeyCorp assumed coverage on Fortinet in a research report on Monday, November 23rd. They set a “sector weight” rating for the company. Two analysts have rated the stock with a sell rating, fifteen have given a hold rating and eleven have assigned a buy rating to the company’s stock. The stock currently has a consensus rating of “Hold” and a consensus price target of $140.04.

Fortinet (NASDAQ:FTNT) last issued its earnings results on Thursday, October 29th. The software maker reported $0.88 EPS for the quarter, topping the consensus estimate of $0.78 by $0.10. The company had revenue of $651.10 million during the quarter, compared to analyst estimates of $639.62 million. Fortinet had a return on equity of 48.30% and a net margin of 18.50%. The business’s revenue was up 18.9% on a year-over-year basis. During the same quarter last year, the firm earned $0.67 EPS. On average, equities analysts anticipate that Fortinet will post 2.33 EPS for the current year. 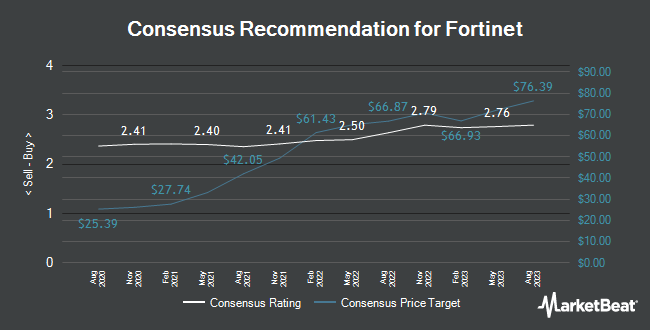 Receive News & Ratings for Fortinet Daily - Enter your email address below to receive a concise daily summary of the latest news and analysts' ratings for Fortinet and related companies with MarketBeat.com's FREE daily email newsletter.

Complete the form below to receive the latest headlines and analysts' recommendations for Fortinet with our free daily email newsletter: