Aurora Cannabis (NYSE:ACB) had its target price trimmed by CIBC from $18.50 to $15.00 in a research report sent to investors on Monday morning, The Fly reports. The brokerage currently has a neutral rating on the stock.

Aurora Cannabis (NYSE:ACB) last announced its quarterly earnings data on Thursday, February 11th. The company reported ($0.28) earnings per share (EPS) for the quarter, missing the Zacks’ consensus estimate of ($0.19) by ($0.09). Aurora Cannabis had a negative net margin of 1,238.94% and a negative return on equity of 16.32%. The company had revenue of $51.93 million for the quarter, compared to analysts’ expectations of $54.66 million. On average, equities research analysts expect that Aurora Cannabis will post -1.17 earnings per share for the current fiscal year.

Featured Story: What are the benefits of a portfolio tracker? 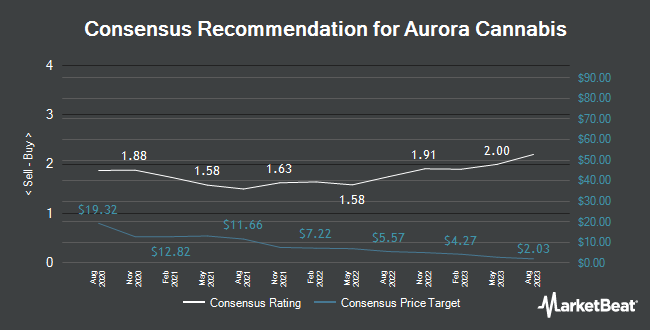 Complete the form below to receive the latest headlines and analysts' recommendations for Aurora Cannabis with our free daily email newsletter: