Dimensional Fund Advisors LP lowered its stake in shares of comScore, Inc. (NASDAQ:SCOR) by 8.1% in the 4th quarter, according to the company in its most recent disclosure with the SEC. The firm owned 1,236,216 shares of the company’s stock after selling 108,489 shares during the quarter. Dimensional Fund Advisors LP owned approximately 1.70% of comScore worth $3,078,000 as of its most recent SEC filing.

comScore (NASDAQ:SCOR) last announced its earnings results on Thursday, May 6th. The company reported ($0.49) earnings per share for the quarter, missing analysts’ consensus estimates of ($0.09) by ($0.40). The company had revenue of $90.33 million during the quarter, compared to analysts’ expectations of $86.99 million. comScore had a negative net margin of 20.18% and a negative return on equity of 29.01%. The company’s revenue for the quarter was up .9% compared to the same quarter last year. During the same period in the prior year, the business earned ($0.19) earnings per share. Analysts expect that comScore, Inc. will post -0.57 EPS for the current fiscal year.

Separately, Zacks Investment Research upgraded shares of comScore from a “sell” rating to a “hold” rating in a research report on Tuesday, June 1st.

comScore, Inc operates as an information and analytics company that measures advertising, consumer behavior, and audiences across media platforms worldwide. The company offers ratings and planning products and services, including Media Metrix Multi-Platform and Mobile Metrix, which measure Websites and apps on computers, smartphones, and tablets; Video Metrix that delivers measurement of digital video consumption; and Plan Metrix, which offers understanding of consumer lifestyle.

Featured Article: What is systematic risk? 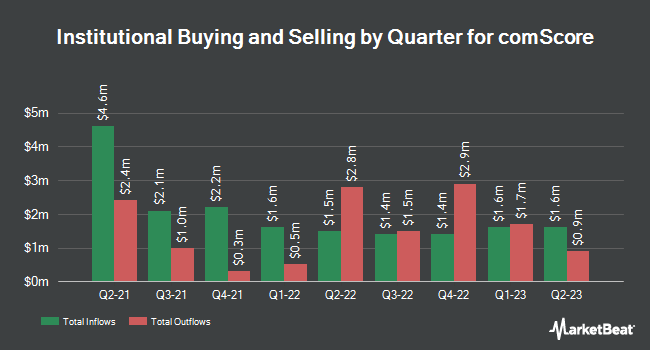 Receive News & Ratings for comScore Daily - Enter your email address below to receive a concise daily summary of the latest news and analysts' ratings for comScore and related companies with MarketBeat.com's FREE daily email newsletter.

Complete the form below to receive the latest headlines and analysts' recommendations for comScore with our free daily email newsletter: