Vroom, Inc. (NASDAQ:VRM) CFO David K. Jones sold 25,000 shares of the stock in a transaction dated Tuesday, June 8th. The shares were sold at an average price of $43.38, for a total value of $1,084,500.00. Following the completion of the sale, the chief financial officer now owns 74,813 shares of the company’s stock, valued at $3,245,387.94. The transaction was disclosed in a document filed with the Securities & Exchange Commission, which is accessible through this hyperlink.

Vroom (NASDAQ:VRM) last issued its quarterly earnings data on Wednesday, May 12th. The company reported ($0.57) EPS for the quarter, beating the consensus estimate of ($0.62) by $0.05. Vroom had a negative return on equity of 19.28% and a negative net margin of 15.19%. The company had revenue of $591.12 million for the quarter, compared to analyst estimates of $511.75 million. During the same period last year, the company earned ($0.32) earnings per share. Vroom’s quarterly revenue was up 57.3% compared to the same quarter last year. Research analysts predict that Vroom, Inc. will post -2.01 EPS for the current year.

Vroom, Inc operates an e-commerce platform for buying and selling of new and used cars in the United States. It also offers financing solutions. The company was formerly known as Auto America, Inc and changed its name to Vroom, Inc in July 2015. The company was incorporated in 2012 and is headquartered in New York, New York. 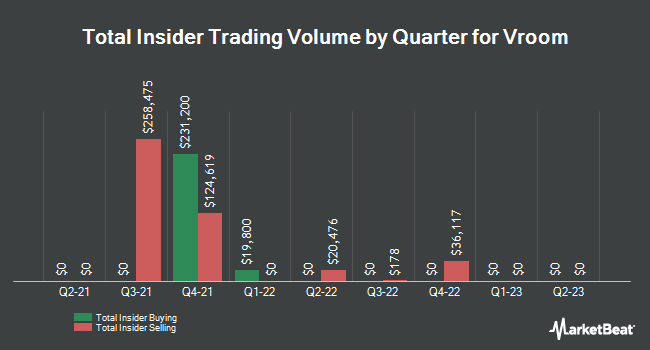 Receive News & Ratings for Vroom Daily - Enter your email address below to receive a concise daily summary of the latest news and analysts' ratings for Vroom and related companies with MarketBeat.com's FREE daily email newsletter.

Inter Parfums, Inc. Expected to Announce Earnings of $0.27 Per Share

American Software, Inc. Expected to Announce Earnings of $0.05 Per Share

Complete the form below to receive the latest headlines and analysts' recommendations for Vroom with our free daily email newsletter: