908 Devices Inc. (NASDAQ:MASS) VP John Kenneweg sold 10,000 shares of the stock in a transaction on Friday, July 16th. The stock was sold at an average price of $32.27, for a total transaction of $322,700.00. The sale was disclosed in a document filed with the SEC, which is accessible through the SEC website.

908 Devices (NASDAQ:MASS) last announced its quarterly earnings results on Thursday, May 13th. The company reported ($0.22) EPS for the quarter, meeting analysts’ consensus estimates of ($0.22). The firm had revenue of $5.54 million during the quarter, compared to analyst estimates of $4.20 million. As a group, equities research analysts predict that 908 Devices Inc. will post -0.64 earnings per share for the current fiscal year.

MASS has been the subject of several recent research reports. Zacks Investment Research upgraded shares of 908 Devices from a “sell” rating to a “hold” rating in a report on Wednesday. SVB Leerink reduced their target price on shares of 908 Devices from $70.00 to $65.00 and set an “outperform” rating for the company in a report on Friday, May 14th. One investment analyst has rated the stock with a hold rating and four have given a buy rating to the stock. 908 Devices presently has a consensus rating of “Buy” and an average target price of $68.00. 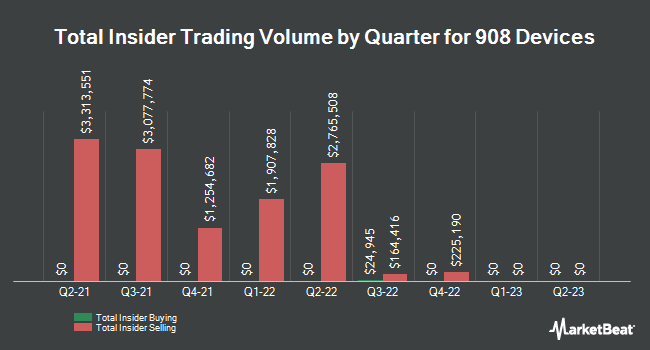 $2.92 Billion in Sales Expected for DaVita Inc. This Quarter

Complete the form below to receive the latest headlines and analysts' recommendations for 908 Devices with our free daily email newsletter: