The business also recently disclosed a quarterly dividend, which was paid on Wednesday, June 30th. Investors of record on Monday, June 14th were issued a dividend of $1.33 per share. The ex-dividend date of this dividend was Friday, June 11th. This represents a $5.32 dividend on an annualized basis and a yield of 2.77%. Crown Castle International’s dividend payout ratio (DPR) is presently 78.47%.

In other Crown Castle International news, VP Robert Sean Collins sold 700 shares of the stock in a transaction dated Thursday, May 27th. The shares were sold at an average price of $188.67, for a total transaction of $132,069.00. Following the completion of the transaction, the vice president now owns 6,299 shares in the company, valued at $1,188,432.33. The sale was disclosed in a document filed with the Securities & Exchange Commission, which is available through the SEC website. Also, Director Kevin A. Stephens bought 310 shares of the business’s stock in a transaction on Friday, May 14th. The shares were acquired at an average price of $181.53 per share, with a total value of $56,274.30. Following the transaction, the director now directly owns 5,487 shares of the company’s stock, valued at $996,055.11. The disclosure for this purchase can be found here. Company insiders own 0.45% of the company’s stock.

Crown Castle International Corp. is a real estate investment trust company, which engages in the provision of access to wireless infrastructure via long-term contacts. It operates through the following segments: Towers and Fiber. The Towers segment offers access, including space or capacity towers dispersed throughout the United States. 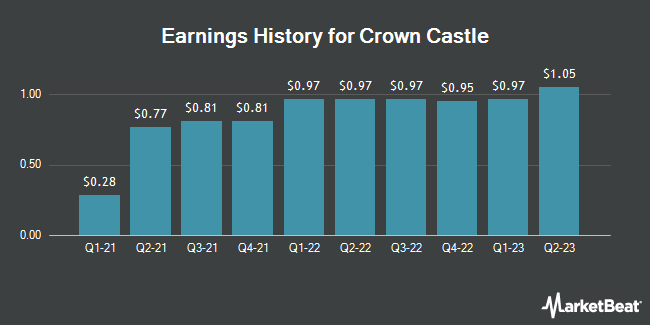 Auxilium Trading Up 9% Over Last Week

Stealth Trading Down 13% This Week

Complete the form below to receive the latest headlines and analysts' recommendations for Crown Castle International with our free daily email newsletter: