BJ’s Restaurants (NASDAQ:BJRI) last released its quarterly earnings data on Wednesday, April 21st. The restaurant operator reported ($0.14) earnings per share for the quarter, topping the consensus estimate of ($0.66) by $0.52. The business had revenue of $223.31 million during the quarter, compared to analyst estimates of $202.45 million. BJ’s Restaurants had a negative return on equity of 16.61% and a negative net margin of 7.60%. The company’s revenue was down 12.3% compared to the same quarter last year. During the same period last year, the company posted ($0.22) EPS.

In other BJ’s Restaurants news, insider Brian S. Krakower sold 4,924 shares of the stock in a transaction on Monday, June 7th. The shares were sold at an average price of $51.72, for a total transaction of $254,669.28. Following the transaction, the insider now directly owns 4,295 shares of the company’s stock, valued at $222,137.40. The transaction was disclosed in a document filed with the Securities & Exchange Commission, which is available at this link. Corporate insiders own 3.60% of the company’s stock. 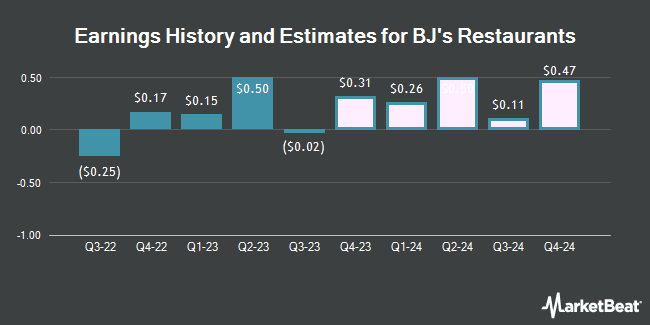 Complete the form below to receive the latest headlines and analysts' recommendations for BJ's Restaurants with our free daily email newsletter: