Cidel Asset Management Inc. lifted its stake in shares of Algonquin Power & Utilities Corp. (NYSE:AQN) by 2.6% during the 2nd quarter, HoldingsChannel.com reports. The firm owned 1,379,391 shares of the utilities provider’s stock after buying an additional 35,260 shares during the quarter. Cidel Asset Management Inc.’s holdings in Algonquin Power & Utilities were worth $20,574,000 as of its most recent SEC filing.

The firm also recently announced a quarterly dividend, which will be paid on Friday, October 15th. Investors of record on Thursday, September 30th will be issued a dividend of $0.1706 per share. This represents a $0.68 dividend on an annualized basis and a yield of 4.39%. The ex-dividend date of this dividend is Wednesday, September 29th. Algonquin Power & Utilities’s payout ratio is 106.25%.

Algonquin Power & Utilities Corp. operates as a diversified utility company. The firm engages in the ownership and operation of a portfolio of regulated and non-regulated generation, distribution and transmission utility assets. It operates through the following segments: Regulated Services Group, and Renewable Energy Group.

Recommended Story: Dual Listing What You Need to Know

Want to see what other hedge funds are holding AQN? Visit HoldingsChannel.com to get the latest 13F filings and insider trades for Algonquin Power & Utilities Corp. (NYSE:AQN). 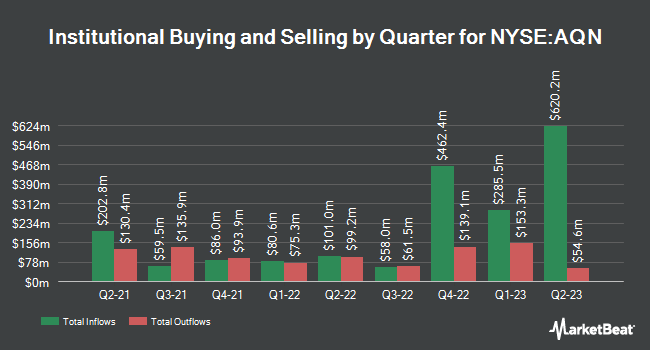 Lordstown Motors Downgraded by The Goldman Sachs Group to Sell

Complete the form below to receive the latest headlines and analysts' recommendations for Algonquin Power & Utilities with our free daily email newsletter: