Analysts forecast that KLA Co. (NASDAQ:KLAC) will post earnings of $4.45 per share for the current quarter, according to Zacks Investment Research. Three analysts have issued estimates for KLA’s earnings, with estimates ranging from $4.44 to $4.45. KLA posted earnings per share of $3.03 during the same quarter last year, which would indicate a positive year over year growth rate of 46.9%. The business is scheduled to issue its next earnings report on Wednesday, October 27th.

According to Zacks, analysts expect that KLA will report full-year earnings of $19.30 per share for the current year, with EPS estimates ranging from $18.74 to $19.74. For the next fiscal year, analysts forecast that the firm will report earnings of $20.23 per share, with EPS estimates ranging from $18.64 to $21.47. Zacks Investment Research’s EPS averages are an average based on a survey of research firms that that provide coverage for KLA.

KLA (NASDAQ:KLAC) last released its quarterly earnings data on Wednesday, July 28th. The semiconductor company reported $4.43 earnings per share for the quarter, topping the Thomson Reuters’ consensus estimate of $3.99 by $0.44. KLA had a net margin of 30.04% and a return on equity of 74.13%. The firm had revenue of $1.93 billion for the quarter, compared to the consensus estimate of $1.87 billion.

KLA declared that its board has approved a stock repurchase program on Thursday, July 29th that allows the company to buyback $2.00 billion in outstanding shares. This buyback authorization allows the semiconductor company to purchase up to 4.1% of its shares through open market purchases. Shares buyback programs are usually a sign that the company’s board believes its stock is undervalued.

KLA Corp. engages in the supply of process control and yield management solutions for the semiconductor and related nano-electronics industries. Its products include manufactured chips, reticle, packaging, surface profilers, nanochemical testers, KT pro equipment, and compound semiconductors. The company was founded in April 1997 and is headquartered in Milpitas, CA. 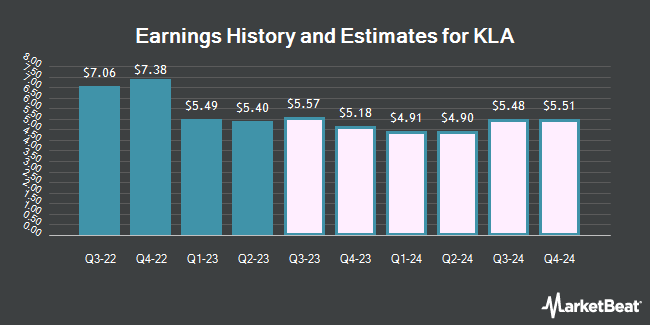 Receive News & Ratings for KLA Daily - Enter your email address below to receive a concise daily summary of the latest news and analysts' ratings for KLA and related companies with MarketBeat.com's FREE daily email newsletter.

Complete the form below to receive the latest headlines and analysts' recommendations for KLA with our free daily email newsletter: