In other news, major shareholder Chemical Co. Ltd. Sumitomo bought 84,018 shares of Myovant Sciences stock in a transaction on Wednesday, September 22nd. The stock was purchased at an average cost of $21.96 per share, with a total value of $1,845,035.28. The transaction was disclosed in a legal filing with the SEC, which can be accessed through the SEC website. Also, insider Ferreira Juan Camilo Arjona sold 2,777 shares of the business’s stock in a transaction dated Wednesday, July 7th. The shares were sold at an average price of $21.75, for a total transaction of $60,399.75. The disclosure for this sale can be found here. Over the last ninety days, insiders bought 730,601 shares of company stock valued at $16,713,133 and sold 32,709 shares valued at $759,981. Insiders own 5.10% of the company’s stock.

Myovant Sciences (NYSE:MYOV) last posted its quarterly earnings results on Wednesday, July 28th. The company reported ($0.67) EPS for the quarter, missing the Thomson Reuters’ consensus estimate of ($0.21) by ($0.46). The firm had revenue of $41.06 million for the quarter, compared to analyst estimates of $61.19 million. Equities research analysts expect that Myovant Sciences Ltd. will post -2.24 earnings per share for the current year.

Myovant Sciences, Inc is a clinical-stage biopharmaceutical company. The firm focuses on the development and commercialization of therapies for the treatment of women’s health and endocrine diseases. It offers ORGOVYXTM (relugolix), a oral gonadotropin-releasing hormone (GnRH) receptor antagonist for the treatment of adult patients with advanced prostate cancer.

Featured Story: What is the operating income formula? 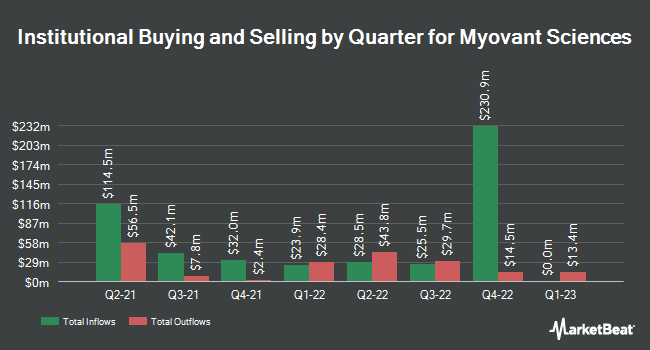 Complete the form below to receive the latest headlines and analysts' recommendations for Myovant Sciences with our free daily email newsletter: