Ollie’s Bargain Outlet Holdings, Inc. (NASDAQ:OLLI) has been given a consensus rating of “Hold” by the sixteen ratings firms that are currently covering the stock, Marketbeat Ratings reports. One analyst has rated the stock with a sell recommendation, seven have given a hold recommendation and six have issued a buy recommendation on the company. The average 1-year price objective among brokers that have covered the stock in the last year is $83.88.

Ollie’s Bargain Outlet (NASDAQ:OLLI) last announced its quarterly earnings data on Wednesday, August 25th. The company reported $0.52 EPS for the quarter, missing the Zacks’ consensus estimate of $0.55 by ($0.03). The firm had revenue of $415.88 million during the quarter, compared to the consensus estimate of $434.60 million. Ollie’s Bargain Outlet had a net margin of 11.09% and a return on equity of 14.40%. The firm’s quarterly revenue was down 21.4% on a year-over-year basis. During the same quarter in the previous year, the business posted $1.04 earnings per share. On average, equities analysts forecast that Ollie’s Bargain Outlet will post 2.7 earnings per share for the current fiscal year.

Further Reading: How to execute a trade ex-dividend strategy? 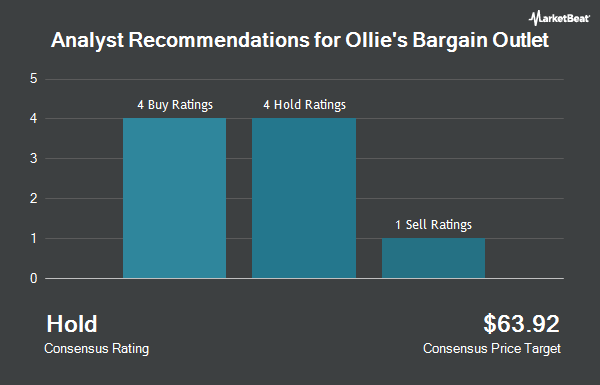 Complete the form below to receive the latest headlines and analysts' recommendations for Ollie's Bargain Outlet with our free daily email newsletter: