Shares of Organon & Co. (NYSE:OGN) have earned a consensus rating of “Hold” from the nine brokerages that are covering the stock, Marketbeat.com reports. Five investment analysts have rated the stock with a hold recommendation and four have given a buy recommendation to the company. The average 12-month price target among brokers that have covered the stock in the last year is $40.29.

In other Organon & Co. news, Director Ma. Fatima Francisco bought 3,000 shares of the company’s stock in a transaction on Thursday, August 19th. The stock was acquired at an average price of $33.79 per share, for a total transaction of $101,370.00. The transaction was disclosed in a legal filing with the Securities & Exchange Commission, which is available through the SEC website.

The firm also recently disclosed a quarterly dividend, which was paid on Monday, September 13th. Stockholders of record on Monday, August 23rd were given a $0.28 dividend. The ex-dividend date of this dividend was Friday, August 20th. This represents a $1.12 annualized dividend and a dividend yield of 3.36%.

Organon & Co, a science-based pharmaceutical company, develops and delivers health solutions through a portfolio of prescription therapies within women's health, biosimilars, and established brands. Its women's health portfolio comprises contraception and fertility brands, such as Nexplanon/Implanon, a long-acting reversible contraceptive. 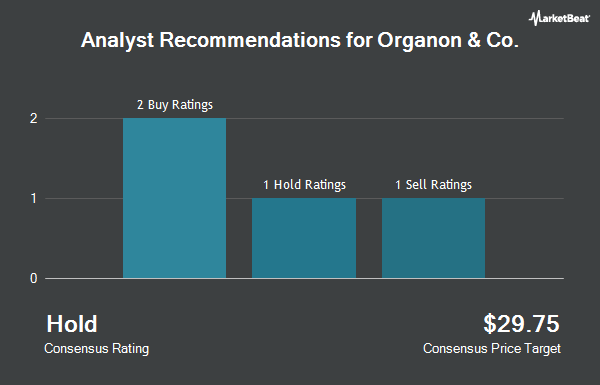 Ruler Protocol Price Down 34.9% This Week

Opacity Price Up 0.9% This Week

Bankera Trading Down 13.6% Over Last Week

Complete the form below to receive the latest headlines and analysts' recommendations for Organon & Co. with our free daily email newsletter: