Costco Wholesale Co. (NASDAQ:COST) declared a quarterly dividend on Wednesday, October 13th, RTT News reports. Shareholders of record on Friday, October 29th will be given a dividend of 0.79 per share by the retailer on Friday, November 12th. This represents a $3.16 annualized dividend and a dividend yield of 0.71%.

Costco Wholesale (NASDAQ:COST) last issued its earnings results on Wednesday, September 22nd. The retailer reported $3.90 EPS for the quarter, topping analysts’ consensus estimates of $3.57 by $0.33. Costco Wholesale had a net margin of 2.53% and a return on equity of 27.30%. The firm had revenue of $61.44 billion during the quarter, compared to the consensus estimate of $61.45 billion. During the same quarter in the previous year, the firm posted $3.13 earnings per share. The company’s revenue was up 17.5% compared to the same quarter last year. On average, equities analysts forecast that Costco Wholesale will post 10.64 EPS for the current year.

In other news, VP Joseph P. Portera sold 3,287 shares of Costco Wholesale stock in a transaction that occurred on Friday, August 13th. The shares were sold at an average price of $445.50, for a total value of $1,464,358.50. The transaction was disclosed in a filing with the SEC, which can be accessed through the SEC website. Company insiders own 0.22% of the company’s stock.

A hedge fund recently raised its stake in Costco Wholesale stock. Morgan Stanley lifted its position in Costco Wholesale Co. (NASDAQ:COST) by 1.5% during the 2nd quarter, according to the company in its most recent disclosure with the Securities and Exchange Commission (SEC). The institutional investor owned 6,185,105 shares of the retailer’s stock after acquiring an additional 91,694 shares during the period. Morgan Stanley owned about 1.40% of Costco Wholesale worth $2,447,261,000 as of its most recent SEC filing. Institutional investors own 66.96% of the company’s stock.

Costco Wholesale Corp. engages in the operation of membership warehouses. Its product categories include food and sundries, hardlines, fresh foods, softlines, and ancillary. It operates through the following segments: Unites States Operations, Canadian Operations, and Other International Operations. The company was founded by James D.

Featured Story: The Role of a Fiduciary and Individual Investors 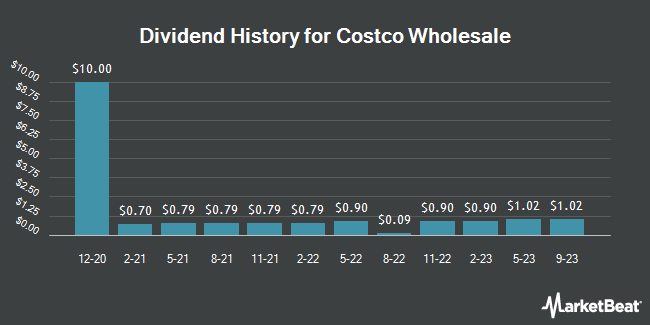 Complete the form below to receive the latest headlines and analysts' recommendations for Costco Wholesale with our free daily email newsletter: