Equities research analysts expect Scorpio Tankers Inc. (NYSE:STNG) to report sales of $162.15 million for the current quarter, according to Zacks. Four analysts have issued estimates for Scorpio Tankers’ earnings, with estimates ranging from $147.25 million to $173.90 million. Scorpio Tankers reported sales of $138.00 million during the same quarter last year, which would suggest a positive year over year growth rate of 17.5%. The company is expected to report its next quarterly earnings report on Thursday, February 17th.

On average, analysts expect that Scorpio Tankers will report full year sales of $546.90 million for the current fiscal year, with estimates ranging from $528.23 million to $563.30 million. For the next year, analysts expect that the firm will report sales of $869.91 million, with estimates ranging from $758.31 million to $967.00 million. Zacks Investment Research’s sales averages are an average based on a survey of research analysts that cover Scorpio Tankers.

Scorpio Tankers (NYSE:STNG) last posted its quarterly earnings results on Thursday, November 11th. The shipping company reported ($1.39) earnings per share for the quarter, missing the Thomson Reuters’ consensus estimate of ($1.31) by ($0.08). Scorpio Tankers had a negative net margin of 49.84% and a negative return on equity of 11.99%. During the same period in the previous year, the company posted ($0.37) EPS.

The firm also recently declared a quarterly dividend, which will be paid on Wednesday, December 15th. Shareholders of record on Friday, December 3rd will be given a dividend of $0.10 per share. The ex-dividend date of this dividend is Thursday, December 2nd. This represents a $0.40 dividend on an annualized basis and a yield of 2.61%. Scorpio Tankers’s dividend payout ratio is currently -8.21%.

Scorpio Tankers, Inc engages in the provision of marine transportation of petroleum products. It operates through the following segments: Handymax, MR, LR1/Panamax, and LR2/Aframax. The company was founded by Emanuele A. Lauro on July 1, 2009 and is headquartered in Monaco. 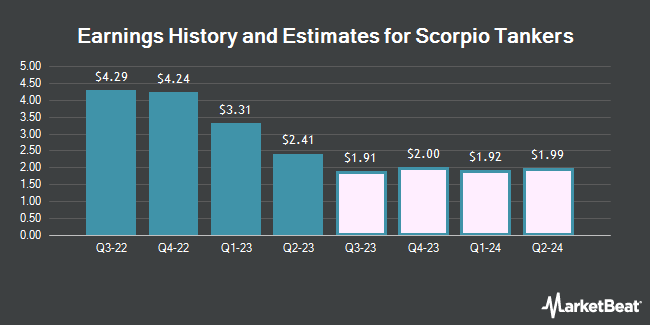 Complete the form below to receive the latest headlines and analysts' recommendations for Scorpio Tankers with our free daily email newsletter: