Sempra Energy (NYSE:SRE) had its price target boosted by equities researchers at KeyCorp from $142.00 to $145.00 in a note issued to investors on Thursday, Price Targets.com reports. The firm presently has an “overweight” rating on the utilities provider’s stock. KeyCorp’s price objective would suggest a potential upside of 5.10% from the stock’s previous close. KeyCorp also issued estimates for Sempra Energy’s FY2021 earnings at $8.27 EPS and FY2025 earnings at $9.77 EPS.

Sempra Energy (NYSE:SRE) last posted its quarterly earnings results on Friday, November 5th. The utilities provider reported $1.70 earnings per share for the quarter, meeting the Thomson Reuters’ consensus estimate of $1.70. The firm had revenue of $3.01 billion during the quarter, compared to the consensus estimate of $2.75 billion. Sempra Energy had a net margin of 9.38% and a return on equity of 10.67%. The company’s revenue was up 14.0% on a year-over-year basis. During the same quarter in the previous year, the firm posted $1.31 earnings per share. On average, analysts forecast that Sempra Energy will post 8.26 earnings per share for the current year.

In other news, CAO Peter R. Wall sold 2,829 shares of the business’s stock in a transaction on Thursday, December 16th. The shares were sold at an average price of $130.00, for a total transaction of $367,770.00. The sale was disclosed in a document filed with the SEC, which can be accessed through the SEC website. 0.10% of the stock is owned by insiders.

Sempra Energy is an energy-service holding company, which engages in the development and operation of energy infrastructure, and provision of electric and gas services. It operates through the following segments: San Diego Gas and Electric Company (SDG&E), Southern California Gas Company (SoCalGas), Sempra Texas Utilities, Sempra Mexico, and Sempra LNG. 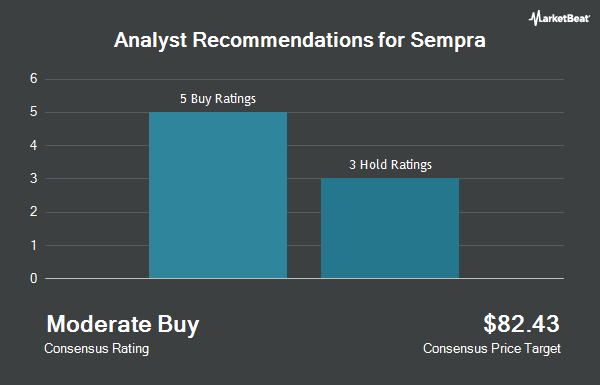 Complete the form below to receive the latest headlines and analysts' recommendations for Sempra Energy with our free daily email newsletter: