JPMorgan Chase & Co. lessened its position in iShares MSCI Japan ETF (NYSEARCA:EWJ – Get Rating) by 9.8% during the 4th quarter, HoldingsChannel.com reports. The fund owned 27,574,457 shares of the exchange traded fund’s stock after selling 3,011,781 shares during the period. JPMorgan Chase & Co. owned 0.16% of iShares MSCI Japan ETF worth $1,846,387,000 as of its most recent filing with the Securities and Exchange Commission (SEC).

iShares MSCI Japan ETF (the fund), formerly Ishares Msci Japan Index Fund, is an exchange-traded fund. The Fund seeks to provide investment results that correspond generally to the price and yield performance, before fees and expenses, of publicly traded securities in the Japanese market, as measured by the MSCI Japan Index (the Index).

Want to see what other hedge funds are holding EWJ? Visit HoldingsChannel.com to get the latest 13F filings and insider trades for iShares MSCI Japan ETF (NYSEARCA:EWJ – Get Rating). 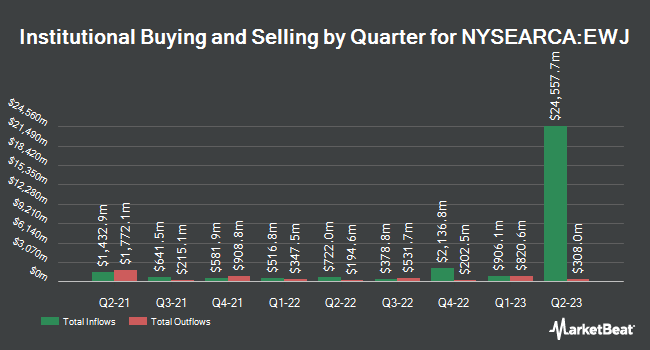 Complete the form below to receive the latest headlines and analysts' recommendations for iShares MSCI Japan ETF with our free daily email newsletter: