ProPetro (NYSE:PUMP – Get Rating) had its price target lowered by Piper Sandler from $17.00 to $15.50 in a report released on Thursday, The Fly reports. The brokerage currently has a neutral rating on the stock.

ProPetro (NYSE:PUMP – Get Rating) last posted its quarterly earnings data on Tuesday, May 3rd. The company reported $0.11 earnings per share for the quarter, beating the consensus estimate of $0.06 by $0.05. ProPetro had a negative return on equity of 2.62% and a negative net margin of 2.21%. The company had revenue of $282.68 million during the quarter, compared to analysts’ expectations of $273.81 million. During the same period in the prior year, the business earned ($0.20) earnings per share. ProPetro’s revenue for the quarter was up 75.1% compared to the same quarter last year. Equities research analysts anticipate that ProPetro will post 0.75 EPS for the current fiscal year.

ProPetro Holding Corp., an oilfield services company, provides hydraulic fracturing and other related services. The company operates through Pressure Pumping and All Other segments. It offers cementing, acidizing, and coiled tubing services. The company serves oil and gas companies engaged in the exploration and production of North American oil and natural gas resources. 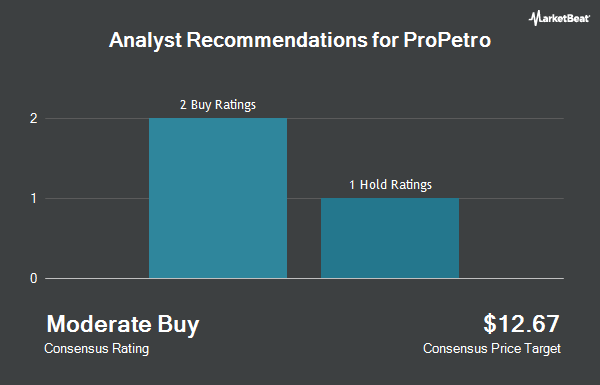 Receive News & Ratings for ProPetro Daily - Enter your email address below to receive a concise daily summary of the latest news and analysts' ratings for ProPetro and related companies with MarketBeat.com's FREE daily email newsletter.

EveryCoin Trading Up 64.2% Over Last Week

BENQI Trading Up 4% Over Last Week

Complete the form below to receive the latest headlines and analysts' recommendations for ProPetro with our free daily email newsletter: