Waratah Capital Advisors Ltd. raised its stake in Traeger, Inc. (NYSE:COOK – Get Rating) by 12.8% during the first quarter, according to the company in its most recent Form 13F filing with the Securities and Exchange Commission. The fund owned 686,245 shares of the company’s stock after acquiring an additional 78,016 shares during the period. Waratah Capital Advisors Ltd. owned approximately 0.58% of Traeger worth $5,106,000 as of its most recent SEC filing.

Traeger (NYSE:COOK – Get Rating) last issued its earnings results on Wednesday, May 11th. The company reported $0.04 earnings per share (EPS) for the quarter, beating the consensus estimate of ($0.01) by $0.05. The company had revenue of $223.71 million for the quarter, compared to the consensus estimate of $210.44 million. Traeger had a negative return on equity of 10.48% and a negative net margin of 17.60%. As a group, analysts anticipate that Traeger, Inc. will post -0.23 earnings per share for the current year.

Traeger, Inc, together with its subsidiaries, designs, sources, sells, and supports wood pellet fueled barbeque grills for retailers, distributors, and direct to consumers in the United States. Its wood pellet grills are internet of things devices that allow owners to program, monitor, and control their grill through its Traeger app. 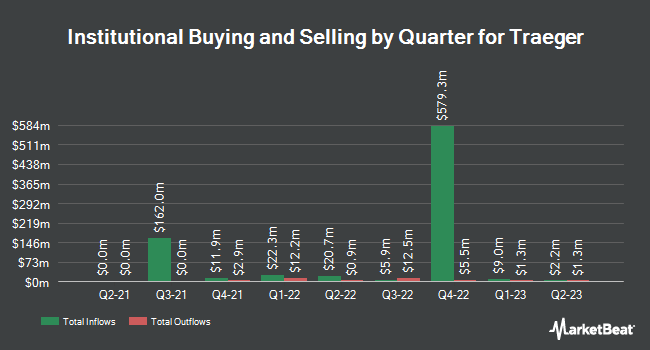 Receive News & Ratings for Traeger Daily - Enter your email address below to receive a concise daily summary of the latest news and analysts' ratings for Traeger and related companies with MarketBeat.com's FREE daily email newsletter.

Complete the form below to receive the latest headlines and analysts' recommendations for Traeger with our free daily email newsletter: