Western Digital (NASDAQ:WDC – Get Rating) had its price target decreased by equities research analysts at The Goldman Sachs Group from $50.00 to $43.00 in a report released on Friday, Stock Target Advisor reports. The firm presently has a “neutral” rating on the data storage provider’s stock. The Goldman Sachs Group’s price objective suggests a potential upside of 28.36% from the company’s current price.

Western Digital (NASDAQ:WDC – Get Rating) last issued its earnings results on Friday, August 5th. The data storage provider reported $1.54 earnings per share (EPS) for the quarter, beating the consensus estimate of $1.52 by $0.02. Western Digital had a return on equity of 19.15% and a net margin of 7.98%. The company had revenue of $4.53 billion for the quarter, compared to the consensus estimate of $4.57 billion. During the same quarter last year, the company earned $1.96 EPS. The firm’s quarterly revenue was down 8.0% on a year-over-year basis. On average, sell-side analysts forecast that Western Digital will post 2.61 earnings per share for the current fiscal year.

In other Western Digital news, SVP Gene M. Zamiska sold 2,169 shares of the company’s stock in a transaction dated Wednesday, September 7th. The shares were sold at an average price of $40.90, for a total value of $88,712.10. Following the transaction, the senior vice president now directly owns 31,554 shares in the company, valued at approximately $1,290,558.60. The sale was disclosed in a legal filing with the Securities & Exchange Commission, which is available through this hyperlink. Insiders own 0.17% of the company’s stock. 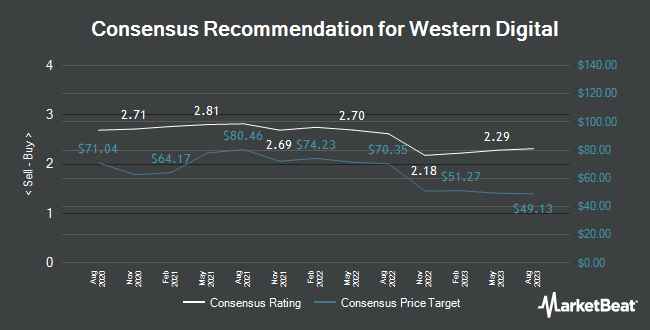 Complete the form below to receive the latest headlines and analysts' recommendations for Western Digital with our free daily email newsletter: