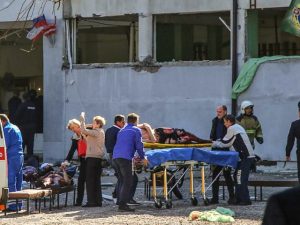 At least 19 people were killed while dozens more were being treated for wounds following a shooting in the Russia-annexed Crimea at a technical college. Twelve have been listed in critical condition and three are said to be currently in comas.

A student, who is 18, raced through Kerch technical college while firing at fellow students prior to turning the gun on himself, said Russian investigators.

Witnesses also spoke about one or more blasts that were caused by an explosive that was still unidentified and the motive for the massacre remained unclear.

The shooter has been identified as Vladislav Roslykov and is said to have run from classroom to classroom firing. He then shot and killed himself, a Russian investigative group announced.

Photos in the Russian media showed the attacker’s body inside the college library.

The group of investigators initially suggested that all the victims had died from gunshot wounds, but some reports spoke of injuries due to shrapnel.

One Russian official said that one bomb had been detonated in the dining area, while some of the students who survived the attack claim they heard at least three different explosions.

Investigators later said a second device had been located amongst the gunman’s personal possessions and that it was disarmed. Photos revealed that as many as 10 homemade explosive devices had been found.

While the precise motive of the gunman remained unclear hours after the shooting, suggestions are that the student, in his fourth year, had become hostile toward the college.

A friend of the shooter’s was interviewed by Russian television and he said Roslyakov had hated the school and vowed to carry out revenge on the teachers there.

It was also reported that the attacker recently was given a permit to have a weapon, but officials questioned that report, with one calling the information fake.

Classmates also told the media that the suspected shooter had been introverted, communicated very little with anyone at school, and for quite some time has not used any of the leading social networks.

The overwhelming majority of victims were students at the school, which has an estimated enrollment of 850 teens.

Authorities did not release a final number of wounded, but one health official in the area said the as many as 50 people were wounded in the massacre. Four military aircraft were standing by to evacuate wounded to military hospitals if necessary said Sergei Shoigu the Defense Minister of Russia.